Councillor Dennis Drewett, Mayor of Trowbridge, hosted the annual Civic Dinner on Saturday 23rd March at The Civic, Trowbridge, the event celebrating the town, and the Mayoral year.

This year, the event took on an ‘eco’ theme with local student Jack Painter speaking on the theme of a world without plastic. Jack is a student at Clarendon College, and earlier in the year spoke at the local Collaborative Schools speaking competition: Councillor Drewett attended the event and was so impressed with Jack and his speech, he invited him to speak at the dinner.

The guests also listened to speeches from Councillor Steve Oldrieve, the Chairman of Trowbridge Fairtrade, and Councillor Hauke Sattler from Leer-Ostfriesland, Trowbridge’s twin town in Germany.

As always, councillors from Leer came to support the event, and the Mayor with Herr Hauke proposing the Loyal Toast.

A guard of Trowbridge Police cadets welcomed the guests as they arrived, along with TAOS Musical Theatre Group who performed a selection of songs from their forthcoming show ‘Oklahoma!’.

The Civic Award for 2018 was awarded to David Baker in recognition of his outstanding contribution to the town. David has promoted the town for over 25 years, through business, education and, latterly, encouraging entrepreneurship in young people. Having consistently been involved with the local Chamber of Commerce, his drive and passion for promoting the town through this medium led to a prominent role in the development of the further-reaching Wessex Association of Chambers of Commerce. On a more local level, David has been involved in setting up the Trowbridge County Town Initiative, the Trowbridge Town Team and Transforming Trowbridge. During his time spent on the Board of Governors of Clarendon College, much was accomplished in the field of developing and nurturing students who had become disengaged and alienated within the school environment. Continuing to work with young people to enhance their skills, knowledge and attitude in the world of work, and to encourage their potential, David has worked tirelessly to bring such initiatives as Young Talent Markets and the continually successful GOFISH project.

Ashton Homes received the Town Enhancement Award for their housing development at Red Gables, in Trowbridge. Each year, when considering nominations for the Town Enhancement Award, the judging panel always look carefully at various projects, the individual character of which may be deemed to have improved the particular area of Trowbridge in which it is situated. This year’s winner has successfully combined characteristics and features both old and new, using a mixture of traditional building styles and materials to create a welcoming environment for living in the Hilperton Road area.

The charity packs (in place of a raffle) sold out and raised £500 towards the Mayor’s charities and an auction raised £970. Including a generous donation from the Leer delegation, the dinner raised £1,570 for the Mayor’s causes:

The Friends of Biss Meadows

The Friends of The Down Cemetery

Thank you to the individuals and companies who donated to the auction and provided charity prizes:

Thank you also to Light Fantastic and Kanconnections for providing props and technical assistance. 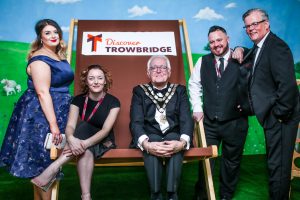