The Mayoress of Trowbridge, Angela Cavill, received the ‘Unsung Hero’ Award at the canine Oscars, the ‘Pawscars’, at the end of a gala dinner the evening before Crufts, where she also received a standing ovation. Angela has been secretary of one of the UK’s largest dog shows for 45 years and is a world authority on Finland’s national breed, the Finnish Spitz, which she has been very successfully breeding since 1970.  Her book on the breed, which she translated into Finnish at the request of the Finnish Kennel Club, has been recognised as one of the best books on any breed ever written. The presentation was prefaced by the following citation:

“In keeping with previous years, the winner of this year’s ‘Unsung Hero’ award, goes to someone who never looks for the limelight or expects to be recognised for what they do for the world of pedigree dogs. What is even more special about this year’s winner is the length of service they have provided in what is very often a thankless task.
They fulfil a role that regularly goes unnoticed, because their quiet and calm demeanour allows them to deal with situations before people begin to complain, which in this day and age is a rare quality to possess.
In over 40 years they have selflessly used their role for the benefit of others, never being accused of helping themselves or abusing what is essentially a position of trust and at times they have almost single-handedly held the ship together through some tricky times.
This person has a steely determination and absolute passion for their breed which has seen them recognised as this country’s most successful kennel for this particular breed, as well as the many years’ role they have fulfilled within in the canine world.
A constant willingness to help others, include new devotees and to share their attention to detail coupled with a wicked sense of humour, which is not seen by many, sets them apart from the crowd.
Anyone lucky enough to know this person will be fully aware that honesty, loyalty and friendship know no bounds. It has to be mentioned mornings are not this person’s favourite part of the day, but the odd bottle of champagne more than keeps them alive well into the evening, when working after midnight would be deemed a normal night.
Most of us present will know her as a smart, elegant and well-kept lady, if a little reserved, who normally always has a smile on her face, sitting behind her desk, however she feels more comfortable with a shotgun on her shoulder and a pair of snow boots on her feet in sub-zero conditions . . . thankfully never the Twain shall meet . . .
Her dedication to learn about and promote a relatively minority breed not only here but around the world needs to be admired: so much so, she even learned the language of the breed’s native land, which even by natives’ standards is no mean feat . . .
It has continued to be her choice to be secretary of a General Championship Dog Show for over 40 years, but she does it with duty and style, and is graceful and humble in her ability to devote her time, and experience. The role has changed vastly and expanded so much, yet she is still fresh every year and wants to deliver to the exhibitor, the judges and spectators a better experience each time. For these reasons, we feel she is fully deserving
of this award . . . so if you haven’t already guessed, this year’s winner is Angela Cavill . . .”

All at Trowbridge Town Council congratulate Mrs. Cavill on her award. 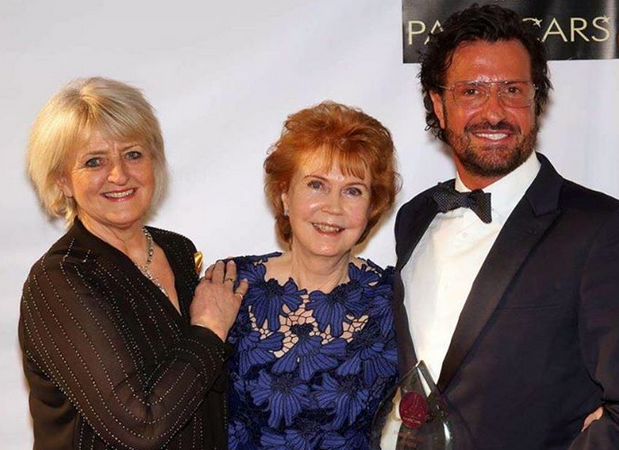