(Thanks to Gary Baker of Trowbridge Nub News for kindly allowing us to repost this interview.)

Trowbridge Museum, whilst mainly focusing on the town’s past, may be unique in being situated in a modern shopping mall. Many of the public passing its entrance, however, will have noticed that it has been closed for a while – but there is a really good reason for this.

The Museum has been going through a major expansion and refurbishment project to incorporate another floor of its former woollen mill location inside The Shires Shopping Centre in a project backed financially by the National Lottery Heritage Fund, The Friends Of Trowbridge Museum and many other local agencies, groups and organisations to the combined tune of over £1million.

And, for those who visit Trowbridge, or local people curious about the town’s history and heritage, the Museum tells how the town developed through time up to the Industrial Revolution to become a very prominent and wealthy cloth-producing town in Wiltshire. It was hoped that the Museum would re-open to the public towards the end of the summer this year, but this has had to be postponed due to the COVID-19 pandemic.

Recently the Museum’s manager Hannah Lyddy gave Gary Baker of Trowbridge Nub News an exclusive guided tour of the venue: first and foremost, Hannah wished to thank all the volunteers who have given of their time to the Museum in the past, and will continue to do so again when the Museum re-opens. (She would also like to point out that anyone who would like to volunteer can contact the Museum through the details at the end of this article.)

So, Hannah, why the refit?

She explained: “This had been rumbling on for a number of years and lots of different options were looked at.

“There were options of moving to a different site – possibly Courtfield House, at the edge of the Town Park. Unfortunately it was in such a state of disrepair, it would have been a huge job to renovate it. Other ideas included the old Bowyer’s site but it was decided that the best option was to stay in Home Mills, expanding to the floor above.

“We have, for thirty years, inhabited this one floor and above us is the exact same footprint of the floor but it has just been empty. It was a bit of a dumping ground for the shops in the mall, really, but an amazing space with the most fantastic views of the townscape.

“So it was decided that would be the best thing. Personally, I am happy because we are in what was the last working woollen cloth mill in the town, and I love this building, the stories seem to just seep out of the brickwork.

“I look at the Mill building as part of our collection, so it is wonderful we will still be here to look after it. From the focus groups we did, this was the most desirable option for the community as well.

“The curator Clare Lyall put in an application to what was the Heritage Lottery Fund, which is now the National Lottery Heritage Fund, for quite a large amount of grant funding – she was successful, which was great. Then we went to the round two bid, where you have to have your architects plans, designers – all of that has to go in. We were successful at the second stage as well – so the majority of the funding came from the National Lottery Heritage Fund.

“The Friends Of Trowbridge Museum, which is a charity that does Stirling work for us in fundraising and general support, contributed funds as well. Then a little bit came from the Town Council and other Parish Councils whose collections we look after.

“As well as expanding, we are renovating our existing floor space. Everything had to come off site and our collections had to be packed off and shipped to a conservation unit in Oxfordshire. So they have been sitting there for about two years – everything apart from the large machinery which we couldn’t move.

“A lot of the work involved renovating the actual mill itself because it was in such a bad state. The roof was leaking and the windows were not watertight. It was in a sorry state. That was the first thing to get completed.”

What was the mill before it became Trowbridge Museum?

“It was part of the Home Mills complex which was a woollen cloth-weaving mill. This mill closed in 1982 which is fairly recently, really. It was the last one in Trowbridge to close.

“They are scattered all around Trowbridge and are what made Trowbridge so well known and wealthy. The cloth industry shaped the town that developed around it.

What is the background to Trowbridge Museum?

“The Museum came into existence in the 1970s and was just a room in the Town Hall. A number of historical items called the Garlick Collection was left to Trowbridge Town Council.

“As time moved on, when The Shires was being built, it was part of the planning regulations that they provide space for a new and improved Museum to move into and that is how we came to be here. They built The Shires around the Home Mill location and said ‘you can have this part’. That was in 1990.

When did the new development start, and when will you be open again?

Hannah said: “We closed to the public almost exactly two years ago and then work on the building began at the beginning of the following year, in January 2019.

“The builders were on site for a long time and we were based over at the Civic Centre (Town Council) in our office there, all crammed in together with all of our weird ‘Museum’ stuff!

“Originally, we were re-opening in August but, because of the pandemic all the work had to stop here completely –and due to a staff member loss we are now unsure of the exact reopening timescale. We will be sure to keep everyone updated through our website and social media pages.

What sort of exhibitions and features will you be putting here when it all opens again?

“Our core collection is items and machinery based around West of England woollen cloth production, some of what we hold is rare and quite unique. It was the finish of West of England Cloth that made it so desirable, it was of luxury quality and had lots of finishing processes.

“We have a lot of social history objects too, ensuring that our collection is really varied and exciting.

“Of course, people interested in engineering love the machinery side but also, for the community, it is really important that we tell the story of the history of the town as well.

“We begin with the Saxon settlement that was here and tell the story right up to the 21st century, so we have a lot to get through!

“The design has been completed and what is happening now is those designs being realised. The next step will be to get the collection back in, which is a huge job and only just beginning.

“We have almost 30,000 objects and we have to make sure they arrive back safely and we know where they are, making them ready for display or the collection store.

“We are so excited to share your new Museum with you soon, we hope you love it like we do.

For more information about Trowbridge Museum or to volunteer, visit www.trowbridgemuseum.co.uk or telephone 01225 751339. 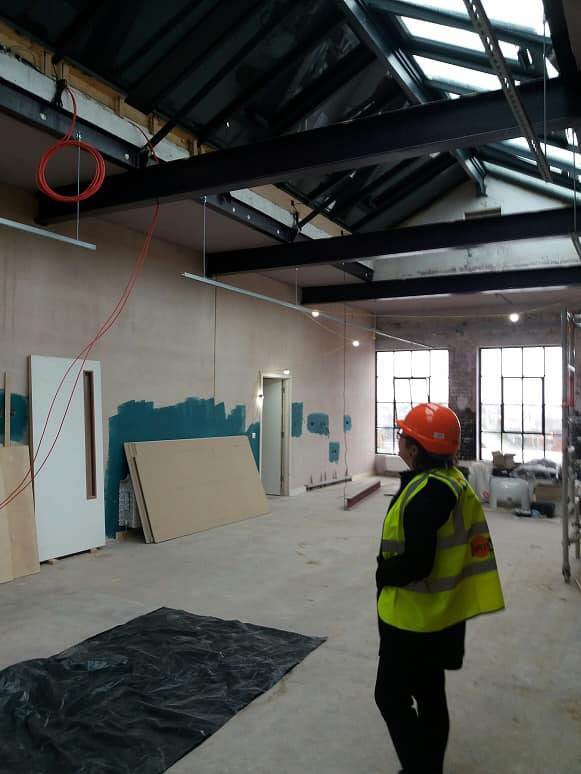