Many people in Trowbridge have been paying tribute to a well-known local historian who has recently died, following a short illness.

Roger Newman was born on October 10, 1937 in Birmingham. He and his wife Jacqueline moved to the Trowbridge area in 1973, eventually making their home in Southwick. Roger soon immersed himself in the life of the town, and soon became a fount of knowledge on Trowbridge history: over the last 20 years he had studied and made records of all the shops and trading places in the town over the last 200 years.

Describing Roger as a keen railway enthusiast, Mrs Newman said if people were ever in need of information on the railways of Britain they would call him, rather than National Rail Enquiries! In fact, he was not just an expert on British railway systems, but also those in Finland, whilst enjoying many holidays travelling by rail. He was for a time chairman of the West Wilts Rail Users group.

Roger spent a great deal of his working life in Trowbridge with Unigate, dealing with exports, but from 1981 he was based at home as a trainer in export documentation. In 2002 he received the Trowbridge Town Council Civic Award for his work with the town’s Chamber of Commerce, of which he was the president in the 1990s.

Mrs Newman explained that because their son has Downs Syndrome, her husband was heavily involved in early days of Stepping Stones, the specialist centre in Trowbridge for children with special needs, and for a time. He was also treasurer of the Trowbridge and District Christian Aid Committee. Mrs Newman also said “We had 52 happy years together, following different interests. We kept a very happy and loving balance in our lives by respecting each other. He really will be greatly missed by so many in Trowbridge.”

Roger was also a keen supporter of Trowbridge Museum, with which he was involved for many years, and was always keen to promote the tourism aspect of the town through his connections with Trowbridge Information Centre. He was also spent a good deal of time over the years with the town’s twinning groups: he and Jacqueline would visit Leer-Ostfriesland in Germany every other year, and he was the treasurer for the twinning group with the Polish town of Elbląg.

Numerous tributes to him have been left on the Trowbridge Museum Facebook page: long-standing Town Councillor Bob Brice described him as “A fount of knowledge on Trowbridge and on European Railway timetables.” Leader of Trowbridge Town Council, Councillor Stewart Palmen commented “So sad, such a lovely man and a head full of Trowbridge history.”

A funeral service will be held for Roger at 1.45pm on Tuesday December 15th at Semington Crematorium: the cortege will make its way through Silver Street and Market Street at approximately 1.15pm, and members of the public are invited to pay their respects. 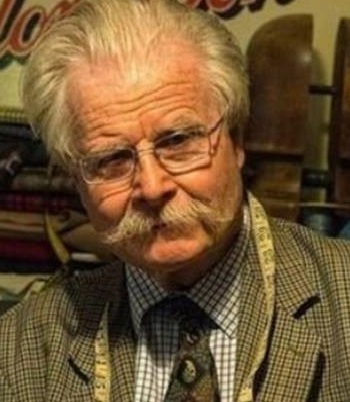