This year things will be a little different because of the pandemic and current lockdown. Two members of the White Horse Trades Council will lay a wreath on the tomb, but there will however be no ceremony as usual: therefore, members of the public are being discouraged from attending. However, if anyone walks through St James Churchyard during the day, the organisers would encourage them to place a flower on the grave in his memory. This would be welcomed, but people should adhere to the current restrictions and maintain social distancing.

Thomas Helliker (sometimes spelt Hilliker or Elliker) is often referred to as the Trowbridge Martyr. He was a young apprentice shearman working in the woollen industry. When Littleton Mill near Trowbridge was burned down in protest at the introduction of machinery, he was apprehended on false accusation despite having an alibi and protesting his innocence. Although he probably knew those who had started the fire, he steadfastly refused to name them. He was charged and sent for trial in Salisbury, where he was subsequently found guilty and was hanged at Fisherton Gaol on the occasion of his 19th birthday on March 22nd 1803, despite public outrage. It is likely that he had been framed by powerful clothiers determined to make an example. 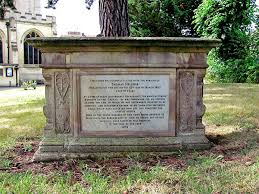