Dom Prag’s recently released 2nd album, ‘ Needle & Thread’, produced by Phil Beer of Show of Hands, is currently garnering great reviews and Dom returns to The Pump as part of his album tour.
‘…echoes of Carthy, Jones and Gaughan… with one of the most compelling guitar hooks since Paul Simon’s Old Friends.’ – Marc Higgins, Fatea

We can look forward to more from this talented performer.’ ***** STEVE JOHNSON, Morning Star.

‘This is Dom’s second CD, and it passes the ‘second album test with flying colours.  The boy doesn’t put a foot wrong.  It is produced by Phil Beer, and that man has the folk nous to back winners.’ – Dai Woosnam, The Living Tradition 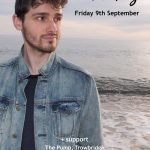