Jesmark, a struggling fisherman on the island of Malta, must make an agonising choice: repair his leaking luzzu, the traditional wooden fishing boat that has been in his family for generations, or decommission it in exchange for a government pay-out. Faced with the temptation of making easy money working for a black-market fishing operation, Jesmark must reconcile his desire to preserve tradition with the need to provide for his young family.

The award-winning and critically acclaimed debut of writer-director Alex Camilleri recalls the neorealist traditions of Luchino Visconti, Roberto Rossellini and Ramin Bahrani, and offers a glimpse into the beauty of an island rarely portrayed in cinema.

Malta has an illustrious history as a filming location, although rarely appearing as itself! Notable productions include Ridley Scott’s Gladiator, Alan Parker’s Midnight Express, Wolfgang Peterson’s Troy, Robert Altman’s Popeye, Steven Spielberg’s Munich, and the television epic Game of Thrones. Luzzu showcase Malta’s dazzling beauty and provides a rare and remarkable insight into the lives and traditions of its working people. With this film, Maltese-American filmmaker Alex Camilleri, firmly places the island on the map as a filmmaking country in its own right, being the first Maltese film to participate in a major international film festival (Sundance, where it won a Special Jury Award for Jesmark Scicluna’s captivating performance) and selected as Malta’s official entry into the 2022 Academy Awards. 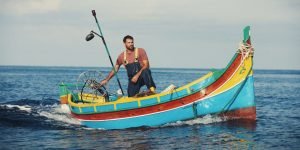