The Korgis with Orchestra & The Mike Smith Big Swing Band

ONE DOUBLE BILL TO RULE THEM ALL!
THE KORGIS & THE MIKE SMITH BIG SWING BAND

The Korgis and The Mike Smith Big Swing Band have teamed up to give you a night you will never forget!
Al Steele took over the direction of The Mike Smith BSB some years back and for concerts expanded the band to include a string section. This meant that we could do some of those luscious songs from the movies as well as our more traditional swing repertoire.
It is no secret that in 2017 Al Steele teamed up with original vocalist James Warren to reform The Korgis. Not only do they perform the massive hits – ‘Everybody’s Gotta Learn Sometime’ , and ‘If I Had You’ but the whole set is littered with the sort of great songs you would expect if The Beatles were still together.
Korgis fans have long asked if we can do a ‘special’ gig with a much bigger band and we have been itching to do this for a long time. The Korgis with Orchestra it is billed as, and these songs – including the new ones from the 2021 release Kartoon World – will sound just amazing with The Mike Smith Big Swing Band – or should we say The Big Swing ORCHESTRA?

The Mike Smith BSB will of course be playing some of the real favourites like ‘Strike Up The Band’ and this time we are concentrating on classics as we reckon there will be enough pop in The Korgis set! We are thrilled that Daniel James and Catherine Sykes will be once again joining us, for what promises to be a night to remember.

We look forward to meeting old friends and hopefully making lots of new ones! 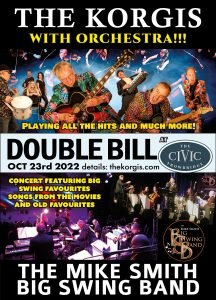